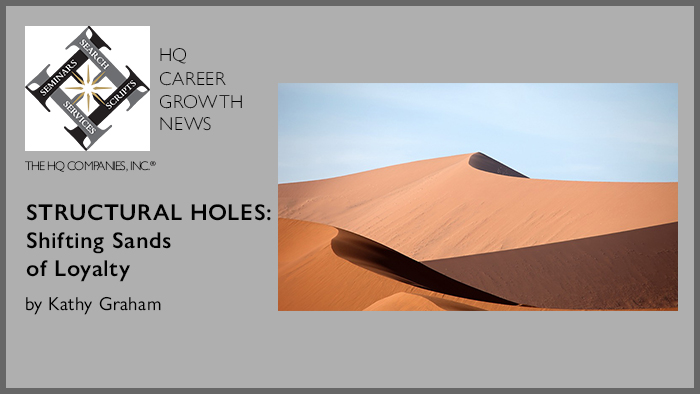 The answer lies in Ana Dutra’s July 8, 2019 Forbes article “The 3 Flavors of Trust in the Workplace” and also in The University of Chicago Professor Ronald S. Burt’s “structural holes” research into the ways that social networks create competitive advantage in careers, organizations, and markets.

WHY LOYALTIES SHIFT: Opportunities occur in markets and organizations where there is an opening for an idea, a different approach...and a country, an organization/company, or an individual(s) seizes that opportunity, filling the “hole” in the structural organization. People—be they a “country,” an “organization/company,” or “individual(s),”—negotiate relations with other people to gain benefits from those relationships that are more beneficial than what they could have alone and are more than what other people have—hence, they are in competition with other people for those valuable productive relationships.

The “structural holes” filled by these countries, organizations/companies, individual(s) may last a long time. The Republic of San Marino has been continuously in existence since its founding in 301 BCE and Nishiyama Onsen Keiunkan, a company founded in 705 AD, is still run by the same family today. More often, structural holes are replaced or absorbed by another opening for an idea, a different approach—a competing structural hole identified and filled by another country, organization/company, or individual(s) with its talented relationships.

Because it’s not people that are the source of the competition, but rather the situational competition for those productive relationships:

Trust is a major component as to whether competitors can become allies, loyal to your interests today in other arenas and tomorrow overall.

Dutra explains that there are three flavors of trust.

Therefore, character trust is most important in the people you choose to work with and for because it can’t be easily corrected (like #2 flavor can) if it’s missing in a person AND it is important (unlike #3 flavor) because it determines who among your competitors can possibly become allies.

Theoretical economic modeling shows that the amount of trust a person should exhibit to gain the most in transactions is equal to the trustworthiness of the other party. Such trust leads to efficient markets, says S. Braynov and T. Sandhom in their 2002 Computational Intelligence article “Contracting With Uncertain Level of Trust. Trusting less means you miss opportunities and trusting more leaves you vulnerable to exploitation.

In a world of changing loyalty, the character trust of the people you choose to work with and for can be a sustainable competitive advantage.